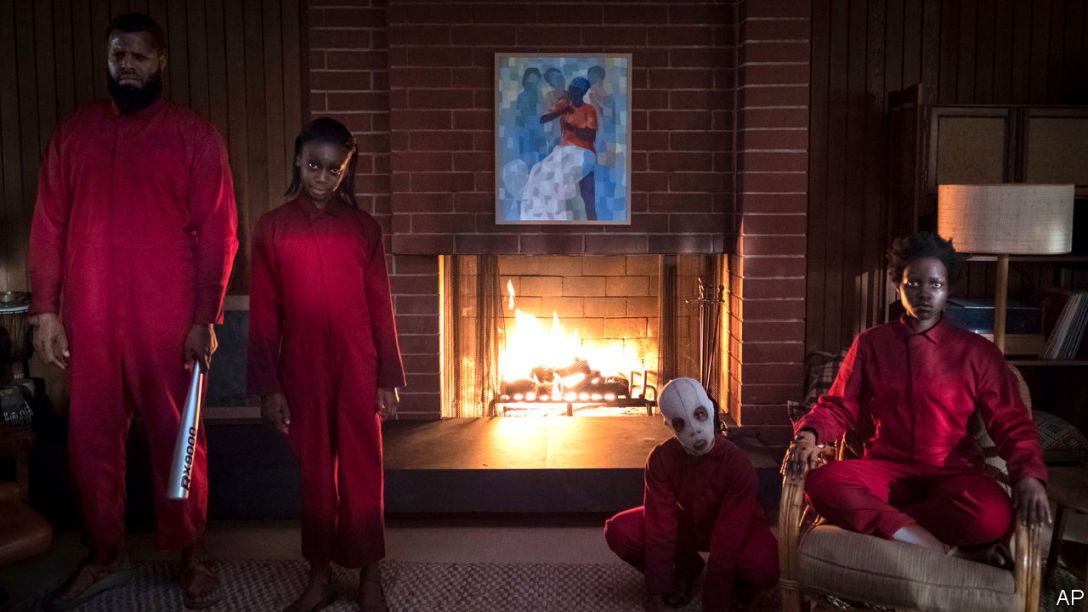 Jordan Peele’s latest horror film, Us, is a delirious and visually captivating experience that, before anything else, is about images and movement. Over the course of its perfectly paced two hours, Peele strips away extraneous details of his film until it culminates in a near-symphony of exquisite framing and unfettered physicality. It proceeds organically from the bare bones of the horror genre, and along with cinematographer Mike Gioulakis (who also worked on It Follows), Peele has created a film that works as a postmodern-ish riff on horror techniques, as well as a fine example of the genre on its own.

It tells the story of an all-American family, the Wilsons, who, one night, find themselves terrorised by their doubles, the self-proclaimed ‘Tethered’ (the Tethered are oblique; they don’t seem to be able to talk, and whilst they are physical clones, there seems to be very little to suggest other similarities between the Tethered and their real life counterparts).

Lupita Nyong’o, in an absolutely stunning turn, is the anxious matriarch Adelaide, Winston Duke is her goofball husband Gabe, and their kids are Jason and Zora, played by Evan Alex and Shahadi Wright Joseph respectively. Before anything else, this family is normal. A prologue set in a hall of mirrors indicates a site of trauma for Adelaide that seems to have followed her into the present day, but otherwise this is a very ordinary domestic grouping; the dad makes endless corny jokes, the daughter lives on her phone, the young son is prankish and difficult.

An impromptu family visit to the beach, the same one which scarred Adelaide in the opening, causes Adelaide to grow increasingly uneasy. When young Jason wanders off and sees a man standing facing away (one of many shots of someone looking at someone else, with their back turned), with blood dripping from his fingertips, Peele uses this as an opportunity for both foreshadowing and a consolidation of the central theme of the family. The climax of the scene isn’t a jumpscare, but the Wilsons embracing, the sun beating down on them, and the camera looking up almost reverently.

Peele consistently imbues the narrative framework of domesticity with genuine warmth, and this works both as a thematic core and a recurrent visual motif; after one standout visual set-piece, the payoff is the Wilsons’ sat round a dinner table in various states of exhaustion and pensiveness. This both grounds the film, but is also the point of the film; the fact that the Wilsons are an ordinary family, who we can relate to, allows the eventual horror to seep in naturally. It also marks a nice contrast, after Get Out, that this film is about a loving family as opposed to an evil one.

This is also a film steeped in symbolism. There are countless attempts to ‘unpack’ the film, and whilst it has (rightly) received rapturous praise, the most common criticism of the film is that it leaves so much unexplained. However, I think to approach this as a film to be ‘understood’ is the wrong way to watch it. Peele wasn’t joking when he Tweeted “Us is a horror movie”; it is that, foremost, but onto the framework of the genre Peele works through images, and motifs that are clearly on his mind. Whilst the film is far from ‘experimental’, it has a certain ‘anything-goes’ bent that is very, very rare in mainstream cinema, and Peele places images in front of us without implying that they have a defined meaning or purpose.

The recurrence of rabbits, for example, could exist draw parallels between overpopulation and the plight of the Tethered, as well as a statement on the collective grouping of the dark underbelly of America’s id. Yet it seems like Peele has used it in his film because he simply likes the look of it, not to explain it or to make points with it. The same is true of the motif of scissors; there is an obvious visual correlation between the theme of ‘untethering’ and the use of scissors as a cutting device. Yet scissors are more painful than knives or machetes, and when I think of their use throughout the film it is as a pain-device as opposed to symbolically. The symbolic use is there, and the symbolism is a chief pleasure of the film; but it is not the film itself. Peele uses symbolism in the same way Argento used colour, and Kubrick used symmetry.

The result is a deeply pleasurable film on a visual level; Gioulakis has clearly worked hard with Peele to imbue every frame with a love for the image that borders on, but doesn’t tip over into, excess. There’s a dual close-up/long shot near the climax of the film that is an almost direct lift from Jaws, of a face dominating one half of the screen and action occurring in the background of the other half, and yet the way Peele has explored the themes of identity means that this transcends simple homage; whilst Us is absolutely in the (largely tiresome) milieu of self-aware, 80’s fixated cinema, it has a strong enough visual patois to distinguish itself.

The colour palette is large and bold, from the red of the Tethered’s jumpsuits to the stark use of off-colour white at the climax; the camera zooms, swirls, and tracks alongside characters, and in one scene at the end cuts with precision across three different planes of action with clarity and dazzling focus (in that one sequence it achieves more with human physicality than Darren Aronofsky did with the entirety of Black Swan). And the way the stillness of the core image of the Tethered standing stock-still on the Wilson’s driveway gives way to four distinct patterns of movement that haunt the rest of the film is a masterclass.

Ultimately, however, Us is centred by Nyong’o’s stunning, complicated performance. With constant modulation and a refusal to engage with cheap hysterics, she delivers a turn that’s reminiscent of Mia Farrow in Rosemary’s Baby , with an unerring use of her face and penetrating eyes to anchor the film. It’s a challenging dual-role, and one that Nyong’o performs with such distinctiveness that at times you forget you are watching the same actor twice.

Us is an obsessive’s film, and I don’t doubt that it will be remembered and discussed for a long time to come. Peele has created something striking, bold, and febrile, and I strongly look forward to what he does next.