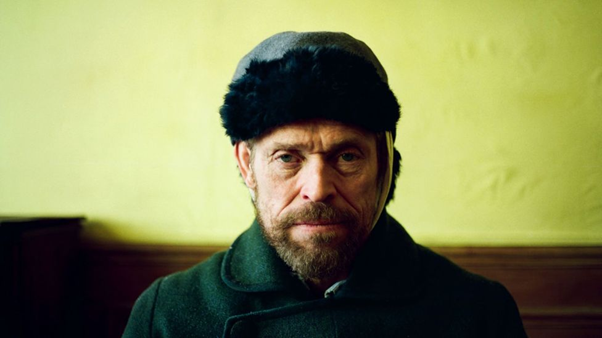 “God is nature, and nature is beauty.”

Julian Schnabel’s At Eternity’s Gate, a biopic of Vincent Van Gogh (Willem Defoe), is a lush and pastoral film, imbued with the same depth and tactility that characterised the artist’s paintings. It is full of ruminations on beauty and nature, such as the above quote, but it curiously seems to argue against those things as a salve or saviour; although they made Van Gogh’s life more tolerable, and deeply informed his art, they were ineffective in saving Van Gogh from his inner torpor. Ambiguously, and perhaps wisely, the film doesn’t seek to pathologise or categorise, with a modern lens, whatever it was that afflicted the great artist, and instead simply shows scenes from his life as Van Gogh might himself have experienced them.

Based on the pieces of the puzzle of Van Gogh’s modern legend, the film is filled with rejection. It opens with a surly café owner ordering him to take his artwork elsewhere, and ends with the act of senseless violence that took his life. Along the way, he is accosted by schoolchildren, met with chilly disdain by the young woman who works at the tavern he patrons (Stella Schnabel), abandoned by his only non-familial friend (Gauguin, played with a twinge of pomposity by Oscar Isaac), and told by a priest (Mads Mikkelson) that his work is spiritually ugly. He spends much of his later years in institutions, and although it is never seen by the viewer, the film covers Van Gogh’s slicing of his own ear.

The above description could make the film seem hopeless and rote, however two filmmaking elements anchor (and elevate) the narrative approach taken to the material. The first is Defoe’s committed, generous, inward performance. It would be easy, and possibly tempting, to play Van Gogh as some kind of egregiously tortured genius, and there are scenes where Defoe externalises Van Gogh’s inner plight, but in the main Defoe’s performance is keenly grounded. We sense that Van Gogh knew exactly who he was, and what he wanted; his commitment to mental institutions would have been deeply unfair in any case, but he is never shown as anything less than a coherent man, beset by troubles, as opposed to a troubled man with flashes of coherence. His struggle was an inability to be understood, but he understood himself just fine.

We see that he was never happier than when scrambling up a rock to catch a view of a field, or sat quietly regarding the roots of a tree, and we see that he was able to capably articulate that happiness to those he cared about. Although the film does serve up a large number of injustices to Van Gogh, they are external forces acting on a man with his own view of the world, as opposed to woven in the fabric of his life. There are a large number of shots of Defoe simply looking, at his friends, at landscapes, and these shots (often nonverbal) empathise Van Gogh’s inner life in a way that a traditional biopic, with exposition dumps and demarcated lines between life events, would have failed to do.

The second aspect that elevates the film is Benoit Delhomme’s digital cinematography. Characteristically for a film by Julian Schnabel, the film uses high contrast images, rich with saturation, to evoke the subjective sensations and feelings of his subject (it is as grounded in the personal as The Diving Bell and the Butterfly, to which this film seems to be a companion piece). There is a remarkable grace and tactility to the camera movements, as well as a strain of genuine experimentation; on a handful of occasions, the camera drops to the floor with a judder recognisable from a found footage movie. Characters also frequently look into the camera, and the film passes in and out of Van Gogh’s perspective explicitly, and his perspective subjectively. Even when the camera isn’t fixed to his gaze, it still suggests the world as Van Gogh experienced it, with the lower half blurred as if with glaucoma.

The closest the film comes to visualising the hallucinations that Van Gogh suffered with is through image layering, and even this technique is not only used to indicate strife, but a retreat into an inner world. One spellbinding sequence in the first act sees Van Gogh walk through a field of dead sunflowers. The camera layers a crane shot of the field on top of a shot of Van Gogh’s feet, with images of the grass and trees around him. It’s an overwhelming sequence, but not an unhappy one, and it points to Van Gogh’s paintings as an attempt to recreate the effect nature has on him.

Schnabel’s film, then, takes the facts of a man’s life and turns it into as subjective document of sensations and feelings; it seeks to experience, not educate. The end-result is a film that does little to inform about what Van Gogh was like, but does an effective job of portraying what it must have been like to be Van Gogh. Ultimately, it is this empathy that ties the whole thing together.